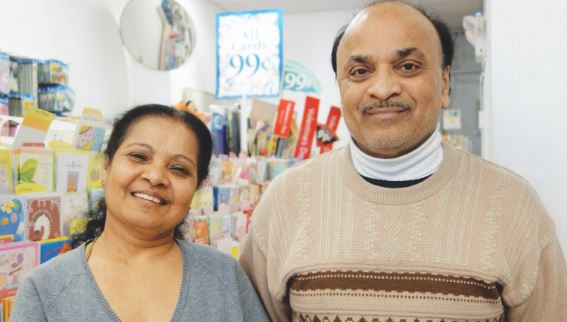 “Welcome my friend, it’s so good to see you again,” says Jay Kadakia as he greets a patron of 15 years to his Jeena Jay Convenience store. The warmth from Jay and his wife Malwika is one of the reasons customers keep coming back. According to one lottery purchaser, “They go out of their way to take care of us, so even if my numbers don’t come up, it’s still a win for me.”

Having bought the Howell business in 1985, this duo has gained a following from loyal patrons who come in to purchase lottery tickets, scratch off games and pick up a few 99-cent greeting cards, as well as miscellaneous supplies and notions.

It’s all about friendship. When a customer was recently hospitalized, he called Jay to ask for special deliveries of his favorite scratch off games. Jay visited with him almost daily. Another customer considers Jay and Malwika part of his family. And, quite a few have credited the owners for the multiple winning tickets.

But, “for me, it’s the joy of frequently seeing customers who have become my friends. We talk, we share and we laugh. Sometimes they win, but my wife and I have nothing to do with that,” Jay says with a smile

Jay’s entrepreneurial spirit goes back seven generations of business ownership. “I once had a boss when I first came to America with my beautiful wife in 1983, but then I read a notice to purchase this store. Malwika and I have been pleased ever since.” And judging on his return customers, so are they.

Jeena Jay is located on the north side of the mall between Howell Academy of Dance and Atlantic Physical Therapy.