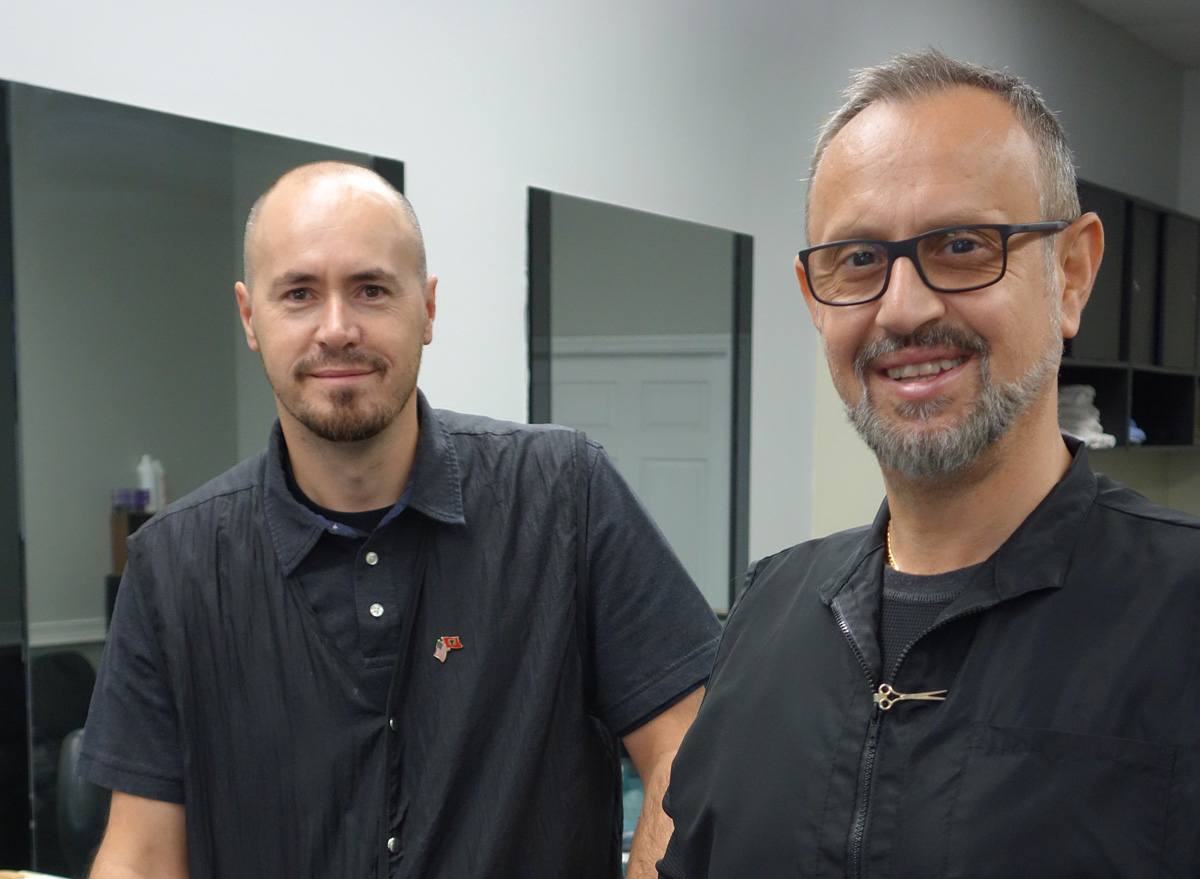 Along Route 9 in the small town of Howell, NJ, is Niri Barber and Family Salon. Run and managed by brothers-in-law Reggie Spaho and Art Cupi, this little shop is renowned for its great haircuts and loyal following.

“This is our passion,” says Reggie (on right). Neither can imagine ever doing anything else. Born and raised in Albania, but met in Howell, the brothers-in-law have practiced their craft for a combined total of over 40 years.

Reggie trained with Niri Bomova, the master himself who had his own salon in Staten Island and later bought an existing shop in the Howell Plaza Shopping Center. While learning the trade, Reggie met and fell in love with a coworker, Niri’s daughter Dolly.

Art began cutting hair back in Albania, took a break to work in a restaurant in the US and eventually came to work at Howell. He was mentored by Niri’s other daughter, April, married her and has never looked back.

Of today’s cosmetology degrees, the barbers shrug. “Our way is better.” For them, the best way to learn is at the side of skilled barber mentors.

Reggie describes cutting hair as a process and collaboration. He recalled a man who came in with long hair and wanted something different. With each step, he looked with the man into the mirror, and together, step by step, they went shorter. “The perfect haircut is like drawing a picture. It emerges in its own time as a work of art. This is my favorite type of haircut – from no expectations to something magical.”

One of the shop’s specialties is skin fades, a trend that’s not going away any time soon. While it looks simple – gradually cut the hair shorter and shorter as the clipper moves towards the neck until the hair fades away into the skin — the challenge is to gradually blend the hair lengths so it looks seamless. That takes skill.

Bob Herring, a former marine and a sergeant in the Manalapan Township Police Department swears by Reggie’s artistry for his weekly fade. “I’ve been coming here for 13 years. When you find someone you trust and enjoy, you keep on coming. To be honest, they do the best haircut in the area, there’s never a long wait, and the conversation is always entertaining.”

While not called upon to do so often, Reggie and Art can also shave simple designs into the hair — letters and numbers, lightning bolts and are pleased to do so. It’s not unusual for people to come with a magazine clipping in hand to ask for a completely different cut, which can work out wonderfully. On the other hand, if they “simply don’t have the right hair for those styles, we need to carefully suggest haircuts that would work better for them.”

Working with people of all ages, they philosophically agree that one-year-olds are easy, but two- and three-year-olds are harder because they know what’s going on and prefer to attempt escape. A successful boys’ haircut is always rewarded with a lollipop – but it’s the adults that are more challenging. “Even if we don’t offer them any, it’s the grown-ups who demand a piece of candy,” chuckles Art.

The job does have its vagaries, the toughest of which is standing all day. But the best part of it is the “happiness of the people when they get out of the chair and say, ‘wow you did a great job!'”  Reggie and Art have built a solid reputation over the years, and are proud to have the complete trust of their clientele.  “We’ve seen kids grow in to college kids and they trust us.  They come in and say, ‘just cut my hair the way you think is best.’”

Not just for men

While Reggie and Art specialize in men’s styles, James “Jimmy” Falton is the expert on women’s. He was the original owner of the salon (under a different business name) and continues to work at Niri’s, and after 35 years, he continues to hone his abilities!

Already a family affair, the future looks secure at Niri’s. Reggie’s two older sons (he has four children), ages 16 and 17, are interested in the family business. They come in and sweep the floor and plan to enroll in cosmetology school. Their father and uncle couldn’t be prouder.

Stop by Niri Barber and Family Salon for a complimentary hair assessment.

Like anything, grooming one’s beard is an art. Many men will have their barbers style their beards, but if you prefer to do so at home, here are some tips from Reggie and Art: